EXPERIENCE THOUSANDS OF YEARS OF STORIES ETCHED IN STONE

Wherever you turn in the Highlands and Islands, the stories of thousands of years of people and communities are permanently preserved in the landscape. This can especially be felt in Caithness, a living landscape where countless stories are inspired by the gentle roll of the hills and seas, the bustle of modern towns and coastal harbours as well as the remains of past communities etched in stone, are all waiting to be discovered.

In this self-guided itinerary, inspired by stories submitted to our Spirit: Stories archive, explore a selection of these fascinating tales across the north east of Caithness. 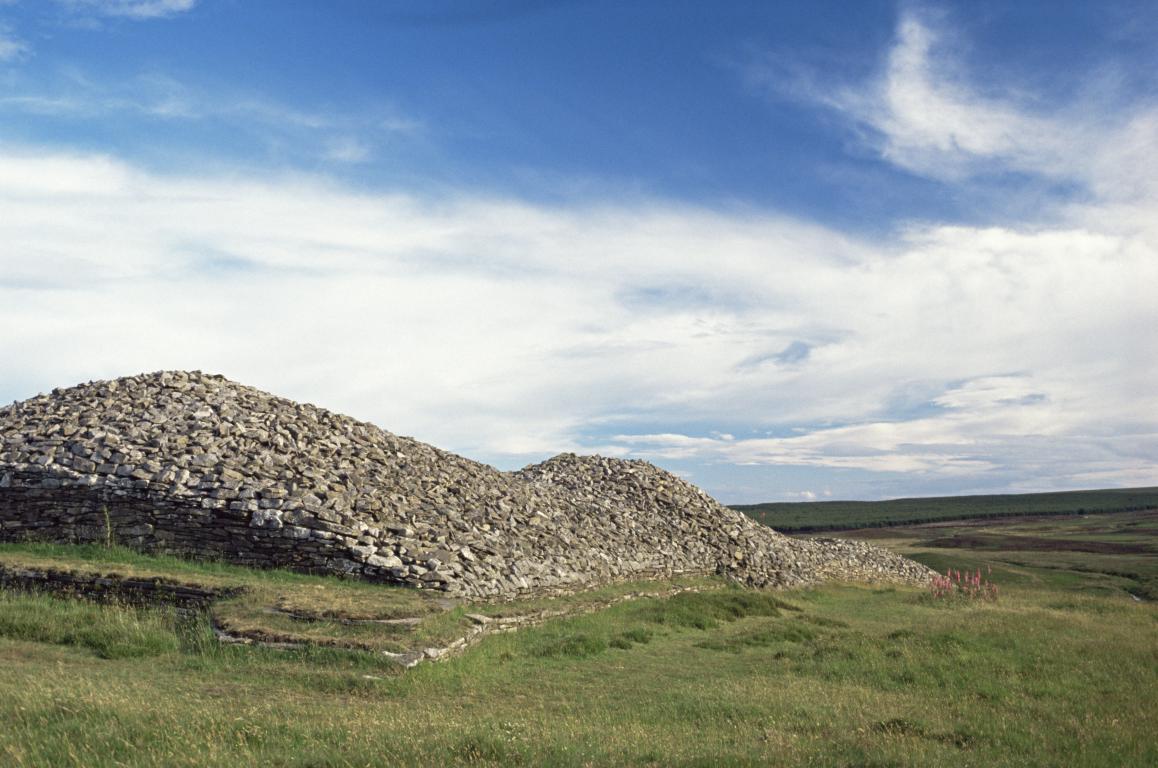 THE GREY CAIRNS OF CAMSTER

Begin your journey at the heart of the Flow Country with a visit to the Grey Cairns of Camster. At 5,000 years old, the chambered burial cairns of Camster Long and Camster Round are two of the oldest Neolithic stone structures in Scotland. Together, the cairns represent a monument to the ingenuity, lives and stories of some of the earliest communities of Caithness.

Continue your journey 20 miles north to the eastern seaboard of Caithness. There, feel history in every step at the magnificent Nybster Broch. This broch is an incredibly well-preserved example of an architectural icon unique to Iron Age Scotland and just one of 200 brochs in the Caithness region. Nybster Broch, however, has a history which expands over a thousand years beyond the Iron Age with evidence of Roman trade, a possible Pictish settlement and a stone monument, Mervyn’s Tower, dedicated to the memory of excavator Sir Francis Tress Barry. Just a short distance from Nybster Broch and atop the cliffs of Sinclair Bay, view the dramatic ruins of Old Keiss Castle. Owing to its precarious position, it is not possible to enter the castle but visitors can still gain a sense of its history from a safe distance. Built in the late 16th century, the four-storey castle was once the seat of the Sinclair family until its fall into disrepair in the early 18th century. While the Sinclairs relocated to the grand Keiss House in 1755, the crumbling remains of Old Keiss Castle will stand as a testament to the individuals who once lived and breathed this building until it falls into the icy North Sea.

Place names hold their own hidden histories - a unique power of storytelling in itself. This is particularly true across Caithness and in this case - ‘Scarfskerry’. Deriving from the Old Norse for ‘Cormorant’s Rock’, the name reveals Scarfskerry and its cliffs as a historic home for a flock of cormorant, or ‘sea raven’, birds. The place name Caithness in itself derives from Katanes - a combination of Cait or Catt, a Pictish kingdom, and the Old Norse nes meaning headland. Wherever you go in Caithness, and indeed in the wider Highlands and Islands, each place name has its own story. Continue your journey to Brough Bay, home to the most northerly village on the British mainland. The rocky shores of Brough Bay, whose name derives from the word broch, are perhaps best known for their wildlife but have also had their fair share of stories. It was here while beachcombing in 1934 that teacher and keen amateur radio enthusiast Danny Begg, came across a message in a bottle amongst the sharp rocks which led to the discovery of the tragic fate of the crew of the trawler the ‘May Island’.

Welcome to Dunnet Head - the most northerly part of the British mainland. The sheer beauty and tranquillity of the peninsula has inspired generations of people from all corners of the nation. Most notably, the coarse old red sandstone rocks which form Dunnet Head have shaped the work of famed self-taught 19th century geologist and author Hugh Miller as well as baker, botanist and geologist Robert Dick. With stunning views across Pentland Firth towards the Orkney Isles, on a clear day, it is hard not to wonder - how many more stories will begin here? Conclude your journey at Mary Ann’s Cottage, just a few miles west of Dunnet Head. Built in 1850, the preserved croft and cottage was once home to three generations of a Caithness crofting family including John Young, William Young and his daughter Mary-Ann Calder who lived here until just before her 93rd birthday in 1990. It goes without saying that the croft is an important, living document of the social history and community heritage of Caithness - the stone walls of the cottage having borne witness to stories of joy, sorrow and key family events throughout the passage of 140 years. Scarfskerry
Discover an area of stunning natural and cultural heritage Brough Bay
A bay associated with a traditional crofting and fishing village, home to a fantastic array of local wildlife The Brochs of Caithness

"The region has for so long been at the forefront of innovation and the white-hot heat of technology - but why not now embrace the past?" A Sense of Place

"...when you grow up hearing all these things and you can go outside and you see the stars at night...it makes it come a lot more alive..." The Grey Cairns of Camster and the Flow Country

Explore the iconic Grey Cairns of Camster, the remains of Neolithic chambered tombs standing tall amongst the expanse of the Flow Country.