Mingulay is an uninhabited island sitting right at the southern tip of the island chain that makes up the Outer Hebrides. With a history of settlement stretching back over millennia, the last Mingulay islanders were finally forced to abandon their windswept home in 1912. Today, this desolate, but beautiful island is owned by the National Trust for Scotland and is popular with sailors, naturalists and rock climbers drawn to this remote archipelago by the rich birdlife and towering sea-cliffs.

Mingulay, and in some instances the small nearby islands of Pabbay and Barra Head (also known as Berneray), can be visited on boat tours or boat charters from Barra and Uist. The dramatic cliffs and sea stacks ensure the sea approaches are breath-taking, and no doubt bring to mind the lyrics of the famous ‘Mingulay Boat Song’, written in 1938, which imagines the islanders rowing back home one last time. For an adventure on the edge of the Highlands and Islands, there can be no better.

A day trip to Mingulay is one for the bucket list. A wild, empty place now, the island was once home to a village that sat overlooking the main bay and was complete with school, mill, church and chapel house. More than a century after the last villager left, it’s now increasingly difficult to imagine how life survived here. But since the Iron Age, with a culture shaped by Christian monks, Viking settlers and clan chiefs, people did build their homes on this isolated island for at least two thousand years.

Visitors making the trip today are rewarded with spectacular coastal seascape – Mingulay has three large sea stacks – and incredible colonies of seabirds including razorbills, gulliemots and puffins. On land there are three hills to explore, the highest being Càrnan (273m). From the summit, looking south, visitors may be able to see the light of Barra Head lighthouse, built in 1833, and which continues to protect the southern approaches to the Minch from its clifftop fastness. 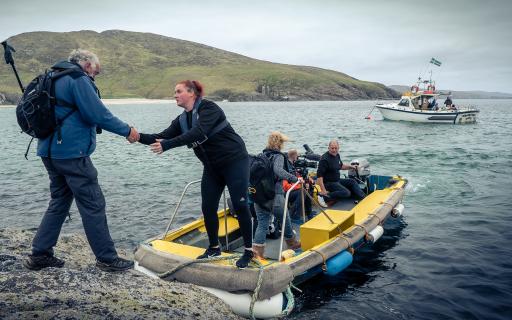