Arran Through the Ages

While often referred to as 'Scotland in miniature', there is nothing wee about the history and heritage of the Isle of Arran.

From the Neolithic stone circles and Bronze Age burial chambers of prehistory to vicious Viking raiders, mighty medieval castles to the traces of battles both lost and won - everywhere you turn, Arran has an abundance of stories to tell. Journey through the ages on the Isle of Arran with this self-guided itinerary. Standing tall in the heart of Neolithic Arran, discover the remarkable Machrie Moor Standing Stones. Not one, not two but six stone circles can be found grouped closely together on the moorland while in the surrounding areas the remains of hut circles and even chambered cairns can be found. While the purpose of the standing stones remains unknown, what is clear is that the landscape at Machrie Moor was incredibly important for Arran’s earliest community.

A short drive from the Machrie Moor Standing Stones, discover Kilpatrick Dun. Until the 1970s, it was believed that this was the location of an early Christian monastery, however, excavations have revealed the incredible complexity of the site. The discovery of a Bronze Age cist below the floor of an Iron Age dun certainly sparked a little debate, however, it is commonly accepted that the dun was predated by a Bronze Age cairn which was rebuilt as a homestead in the Iron Age. 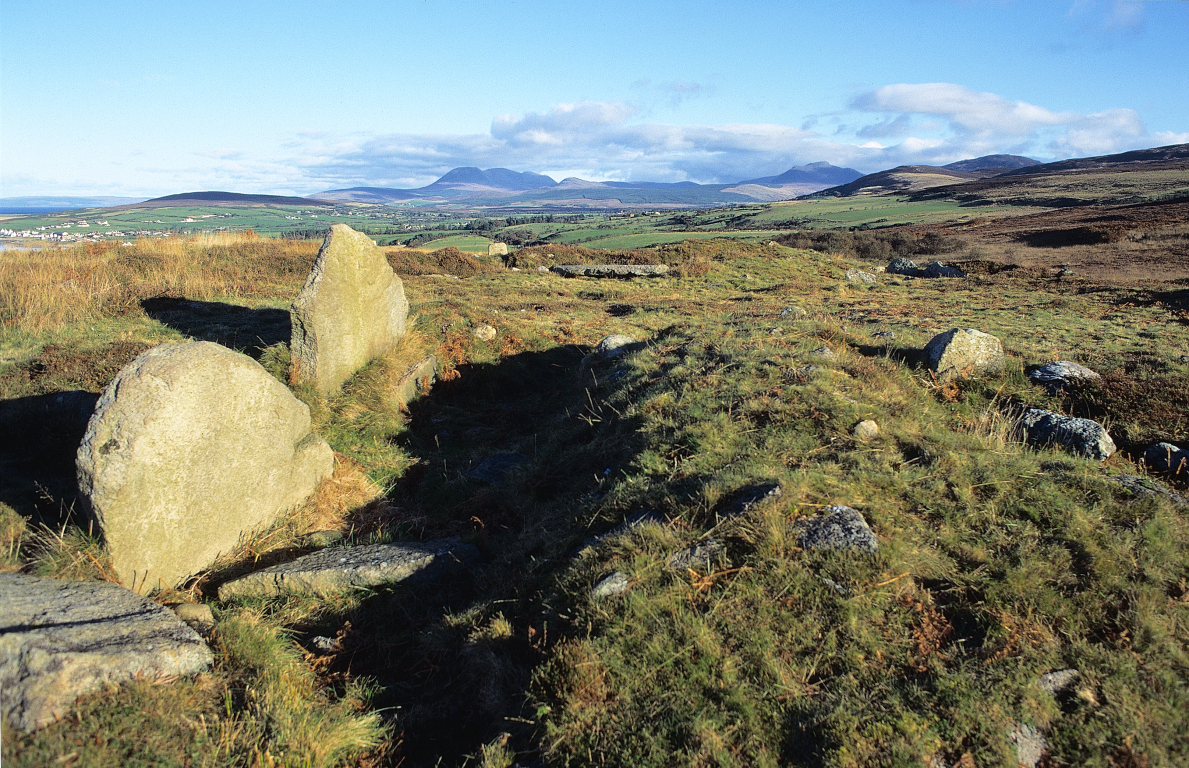 In the south west of Arran, an imposing but isolated grassy knoll rises out of the landscape. This knoll, Torr A’Chaisteal, is all that remains of an Iron Age fortified settlement known as a ‘dun’. Built over 2,000 years ago, duns of the same type as Torr A’Chaisteal are likely to have been held, and the lands tended to, by a single family. While the stone footings of the thick stone walls are all that stands, it is not hard to imagine what life may have been like for the people who lived and worked here.

Bordered by dense forests and shingle beaches, King’s Cave is shrouded in medieval myth and folklore. Could this be the cave where Robert the Bruce had his legendary encounter with a persistent spider? Whether this is fact or fiction is still up for debate, but what remains are the cave’s incredible connections to the Early Medieval Ages. On your visit, admire the cave’s intricate carvings featuring crosses, human figures, serpents and an Ogham inscription - all of which provide a timeless link to the people of Early Medieval Arran, carved in solid rock. On the eastern side of the Isle of Arran, with stunning views out onto the Holy Isle, visit the ruins of a Viking fort. By the 9th century, the Isle of Arran had been enveloped into Viking territories, forming part of Suðr-eyjar - the Kingdom of Mann and the Isles. While little remains of the fort, the impact of Viking presence on Arran is still evident in a Viking boat burial near King’s Cross and in an abundance of local place names with Old Norse origins including Brodrick derived from ‘breda-vick’, meaning ‘broad bay’ and Sannox, from 'Sandvik' or 'sandy bay', in Old Norse.

Discover Arran in the height of the Middle Ages at Lochranza Castle. Situated on a spit extending into Loch Ranza, the ruins of Lochranza Castle are an imposing but beautiful sight. The castle has its origins in the 13th century and a potential point of call for Robert the Bruce in 1306 on his journey back from Ireland to claim the Scottish throne. While the inside of the castle is currently closed to public access, it is still possible to get a sense of its immense atmosphere and historic past while walking around the exterior of the castle. With stunning views over Brodick Bay, take a wander around the unique Brodick Castle Gardens. The famed gardens have their origins in 1710 but grew substantially with the expeditions of early 20th century plant enthusiasts. Thanks to their efforts, the gardens are home to a variety of rare plants, including rhododendrons and camellias, which thrive due to the unique microclimate of the area. On your visit, discover the unbelievable stories of intrepid plant collectors Frank Kingdon-Ward and George Forrest, who proved their passion was no walk in the park.

At the heart of the village of Lamlash, the largest settlement on Arran, lies a monument of great historical significance. It was here on the 25th April 1829, 86 islanders from Glen Sannox were forced to depart their homes and board the brig Caledonia in search of better prospects in Canada as a direct result of the Arran Clearances. The monument, erected on behalf of their descendants in 1977, is a testament to their memory and to the devastating loss of community and Gaelic culture on the island. After a Government ban on whisky in 1781, illicit distilling and smuggling became prevalent across Scotland. While the ban in effect lasted about 40 years, a lack of sustainable infrastructure meant that communities on Arran continued to turn to illicit whisky production and smuggling to support their families throughout the 18th and 19th centuries. Lagg, a small village on the south coast, once at the centre of the smuggling trade is now home to the island’s first legal distillery where on your visit you can discover more about the rich history of Arran whisky.

Discover the wartime and social history of the island at the Isle of Arran Heritage Museum. During both the First and Second World Wars, the Isle of Arran proved to be a strategic asset, particularly the villages of Brodick and Lamlash which were valued naval bases and training grounds. The museum, just a short distance from the ferry terminal, holds stories of fascinating feats of bravery, incredible tales of innovation and stories of tragic losses still felt by the community today. King's Caves
Explore the caves which have inspired famed legends Kingscross Viking Fort
Admire the site of a Viking fort at the stunning Kingscross Point, Arran Explore the burns of Arran through these poetic words- through the old clachans, sites of Clearances, past farms and golf course, tourists and out to the sea.