Credit: Marg Greenwood
< Back to "Uist"

Walking across the Monach Isles, off North Uist

It’s hard to believe that is possible to walk across three islands, but we did.

The three uninhabited Monach islands, taken together, form the shape of a butterfly – Ceann Iar,  the west ‘wing,’ Shivinish the ‘body,’ and Ceann Ear, the east ‘wing’. Shivinish links the two wings at low tide.

After landing on Ceann Iar, I picked my way through tall marram and tussocks. Then an easy trudge over the sand between Ceann Iar to Shivinish where I skirted round its shore, occasionally traversing rocky outcrops.

The tide was coming in. At the east end of Shivinish was a tract of sand over to Ceann Ear, but a racing torrent of incoming seawater had to be crossed. I took off my boots, dangled them in my hand, and waded, knee deep, to the other side.

After slithering up sand dunes the going was easier. Near the ruins of some buildings is a small loch, Loch Nam Buadh, the Loch of the Virtues, which is the subject of an old legend which A. A. MacGregor recounts in his 'Peat Fire Flame'. 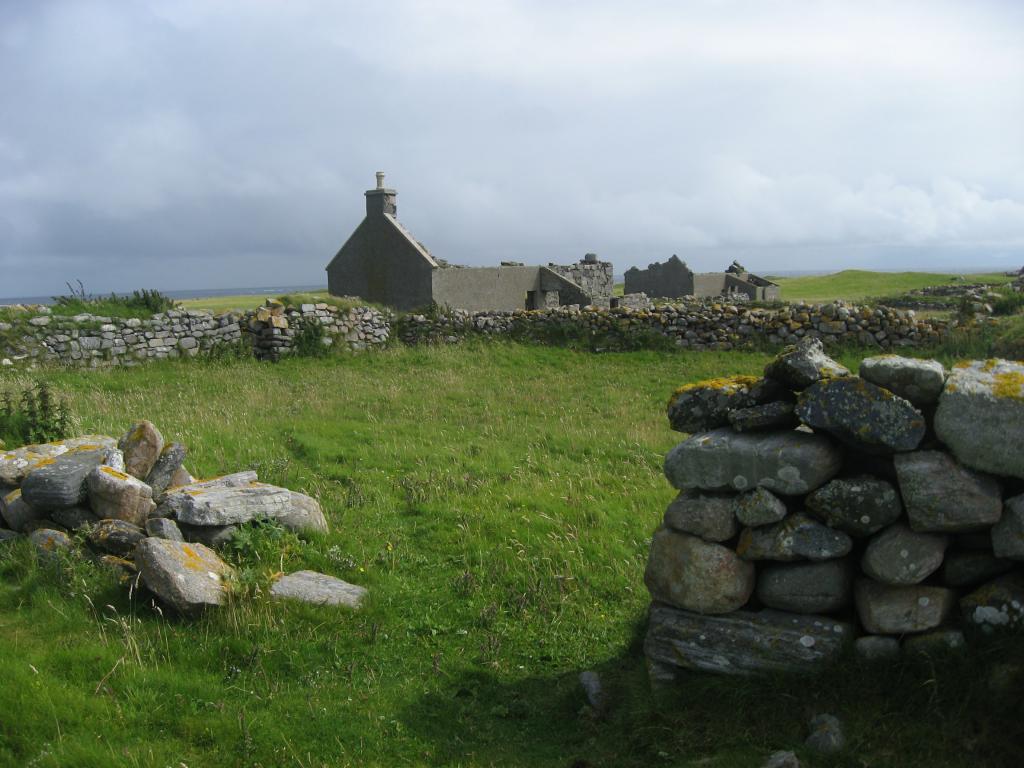 The loch was the abode of an evil water-horse, each-uisge, which got up to nasty tricks. The islanders were so afraid of the monster that they considered abandoning the island altogether. However a certain Mrs NicLeoid had been feeding up a powerful bull in the hope that one day he would overpower the water horse. She led her bull to the loch shore, and he ‘tore at the sod with hoof and horn,’ until the water-horse emerged and faced the bull.

A vicious fight ensued, causing such a huge amount of spray that the islanders couldn’t see what was happening.  Eventually the commotion stopped and the next day a pair of lungs was seen floating in the water; no-one could tell if they belonged to the bull or the water-horse. But that was the end of both creatures, and the islanders stayed.

Luckily I heard no commotion except the lovely sound of singing seals, and rejoined the rest of the party at the old School House.

Enjoyed this story and want to read more? Explore more of the beauty of the natural and cultural heritage of the islands of Scotland through the eyes of Marg Greenwood, the submitter of this story, in her fascinating new book Return to Muck.

Oral tradition, storytelling, and folklore play a key role in the history of many cultures across the world, including the Highlands and Islands. We would love to know, do you have a favourite folklore or tale associated with your local area? How do you feel this tale sums up the Spirit of the Highlands and Islands for you? Tell us below, we can't wait to hear from you!