For me, the Spirit of the Highlands is in its people and its stories, and how the landscape and our history has shaped these things.

In writing a poem about Inverness Castle for the Spirit of the Highlands project I wanted to create something that was historically accurate, but which also worked as a piece of writing on its own terms. It was a way of capturing some of the history of the castle, but also some of the meaning: how it appears to both visitors and locals.

To do this, I thought about the form and content. I was reading different poems written by travellers, or by people engaging with the idea of ‘the north’, and the form is based loosely on what I have read. I wanted a conversational tone, where the speaker in the poem gave the sort of fleeting yet memorable impressions a traveller, or a student of history, might remember after a visit to the castle; the impression of these years of history piling and tumbling on top of each other – although, they are actually all placed within a structure. The castle was architecturally planned, and I wanted the poem to reflect that sense of form – designed to fit a logical sequence, yet also created with some sense of romantic informalism.

To research the content of the poem I looked at many books and articles about the history of the castle and Inverness, the architecture and design of the castle, and viewed many images, both of the modern castle, and drawings and older images of previous castle or the site itself. I see the castle every day from my street, and walk past it frequently as I live in the centre of Inverness, and I have followed the transformation of the castle for the Spirit of the Highlands project since the beginning.

My starting point for the writing was the statue of Flora Macdonald, endlessly watching down the Great Glen. I have always loved the statue, and felt a great respect for Flora, a woman of honour and principle who had a fascinating life.

The verses of the poem look at different moments from the castle’s history. Inverness has a long historical association with Macbeth – although some descriptions of where his castle was are of dubious historical accuracy. The Governors of Inverness castle managed the site through the medieval period, particularly the Mackintosh, the clan most associated with this area. Inverness was of central importance during the Wars of Independence, and Andrew de Moray is another local hero. The castle then passed into the care of the Gordons, though their association with the castle and Mary, Queen of Scots was not a happy one. The castle fell into ruins, though was briefly shored up by government troops and renamed ‘Fort George’ after the 1715 Jacobite uprising. Bonnie Prince Charlie took the castle back, and had it completely destroyed as it became obvious his cause was failing. The French soldier tasked to blow up the castle made a serious mistake with the explosives, and he and his dog were horribly killed in the resulting explosion. The castle site was then completely cleared and left empty until acts in 1819 and 1839 gave financing to build prisons and sheriff courts. The new castle was planned as a centrepiece for a town moving into the Victorian era when all things Highland were celebrated. It was in constant use as a court, and also for things such as the police department and offices, until the new transformation into a tourism and cultural centre began.

I have written two poems, along with completing supporting material such as audio, video and writer’s statements.

Over the last wee while, I have been combining my interest in writing non-fiction history and biography with my interest in poetry. This piece of writing is based on extensive research into the history of Inverness Castle, distilling it all into about four minutes of poetry.

Performed and filmed on location at the castle itself, next to the statue of Flora MacDonald.

a poem by Jennifer Morag Henderson

And Flora said nothing, for now, but watched endlessly down the glen

for her past and future king; the River Ness a blue thread weaving through the heart

of town, and the red sandstone castle sitting,

a hill-fort above the stream –

The pretty daughters walking through the ruins of melancholy

nesting, hidden, once again. A clearance

where kings used to be.

and thought this chequered history –

this approach to Inverness, by sea and the coastal route

to land, the Via Regis King’s Route

the memory of Macbeth –

The washerwomen on the drying green below the old castle site –

below where Flora stands today – soon only the cellars remain.

But then, there is a new town.

A new court. A new jail.

this pleasant seat in delicate air, the birds nesting there,

through the gatehouse to the wooden stockade

of a medieval secular authority.

An age of change and progress, a site for visits of ceremonial

reflecting the standing of the county, the innovation

of architecture, the reclaiming

of prestige, of Scottish style.

The hereditary Governors of Inverness Castle, the MacDuffs,

the Mackintosh: the centuries of clans. And Inverness centred, early and staunch

in the Scottish Wars of Independence:

With a generous approach for horse and coaches, the castle

turns its back upon the town, reorients itself as a romantic

Until Gordons lavished money on their residence, Italian artists in the gallery,

the hall of stone and lime upon the vaults 100 feet long,

and Mary, Queen of Scots came knocking at the doors,

to be refused entry.

in this rallying place.

gathered and the clans paid homage and she shopped for tartan –

but the hanged men stayed on the battlements

And Flora, in bronze, gazing down the Great Glen

watching over the changes, the prisoners of the Crofters’ War,

Mairi Mhor singing in the jail, the slow deterioration

of the soft sandstone

The occupation by the clans, the doors, gates and windows broken up

the tower destroyed and the castle

the installation of the cannon from the Crimea

the flagstaff linked to Sebastopol, the gun from Loos

the police vans, the constabulary

the fire department, the family court

The troops stationed there. Occupied by government soldiers,

the Jacobites’ brief retaking in the ’15, yet overtaken once again:

this distillation of our history, the travellers and what they see

and what that means to them, and what a tourist does

and the essence that they hear

and where we are now

Bonnie Prince Charlie left the castle and his cause in tatters:

blown up by explosive, his French sergeant hurled to his death

across the river, the story of the little dog caught

in the terrific detonation.

with an image of our home, and a writer,

and a castle, and a woman

watching, always watching down the glen.

The Travels of James Fraser

My poem about James Fraser was inspired by one of the pieces submitted to the ‘100 stories’ initiative, and by my own historical research into the real James Fraser and his life and writing.

James Fraser was a minister, writer, historian and traveller from the 1600s, who wrote about the history of the clan Fraser, and its place in Scotland and in Europe.

a poem by Jennifer Morag Henderson

This small place is the centre of the world.

I stand in the clipped green grass of the watch hill

and see the roads travel down before me

out to Europe, and back into the past.

the seat of the clan is the centre of Europe

and I gather around the family story sketches

of Scotland, England and every Continental state.

The harangues of our northern heroes raise

the flames of activity here in the Highlands

I stepped out to view the universe

with cities alive with activity

providence was my convoy in all my travels and voyages.

history is a telescope to the past, and

a mirror of the present. It changes lives.

When I returned unexpectedly one Sabbath morning

the bells of the church rang out a welcome.

now: let my words take you there:

This is the spirit of my Highlands, this spirit of open

enquiry, this telling of tales

here under the crown and strawberry flowers of the Fraser crest

it is a weighty work: a matter of moment

without travelling our open history, we move blind

through the landscape. I tell a synchronism

of events of clan and continent –

be my fellow traveller –

many histories in one.

From the Beauly Firth to Bratislava: The Travels of James Fraser, 1657-60

Discover the remarkable tale of James Fraser, a Gaelic speaker and talented Highland scholar, and his impact both at home and the wider continent... 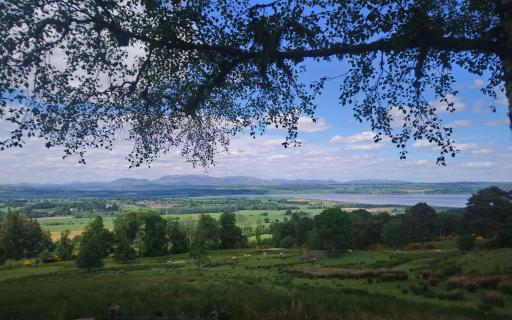