For me, the Spirit of the Highlands is intrinsically linked to both the land and its people.

This song was inspired by the people and stories of Kilmuir on the north end of the Isle of Skye. Specifically, the story of the Cave of Gold and the piper that entered it to fight the beast within.

I grew up just a few miles from the sea cave in Bornisketaig, where the land looks across the Minch towards the Outer Hebrides. I heard the story long before I managed to visit the place itself and it has intrigued me for years: the dark tale, its many variations, a mystery that leaves so much up to the imagination.

All this is amplified by visiting the cave and witnessing its formidable but at the same time strangely inconspicuous nature. It’s the kind of place that stays in the mind and it was only a matter of time before a song came along.

It’s a warm welcome in after a long journey.

The sharing of company, stories and songs at a ceilidh.

Generous hospitality that seems to come as second nature.

A less hurried, but no less diligent way of living.

Strength and comfort in community.

Scenery and weather that command respect but also offer a sense of peace and safety.

It’s seeing a panorama like the Quiraing and then revisiting its beauty over and over in your mind until you just have to go back. Even if you only live the other side of the hill!

The story of the Cave of Gold on the Isle of Skye is a well-known tale from the north end of the island, capturing the imagination of locals and visitors even to this day.

The story is set in the Borneskitaig area of Skye, a few miles south of Duntulm Castle; the cave (called Uamh an Òir in Gaelic) can be accessed on foot by a short walk. Within is supposed to be a treasure trove of gold, hidden by warriors of old, and guarded by a terrible monster. This creature wreaked havoc on the crops of north Skye in its search for food, but no-one challenged it, such was its ferocity. Eventually a local piper, from the famed MacArthur piping family, decided enough was enough: he would enter the cave and deal with the beast.

MacArthur marched in playing his pipes, while friends kept pace above ground. As long as the piper's tune could be heard he was safe, he said, but as the melody got fainter and fainter, the refrain spoke of his wish for three hands: two for the pipes, and one for his sword so that he might fight the monster.

MacArthur never returned, but it is said that his music can still be heard underfoot far inland, where it is believed the cave ends.

Alan writes & releases his music with the duo Mist & Wing:

The Cave of Gold

Be enthralled in the fascinating story of the legendary Cave of Gold, Isle of Skye 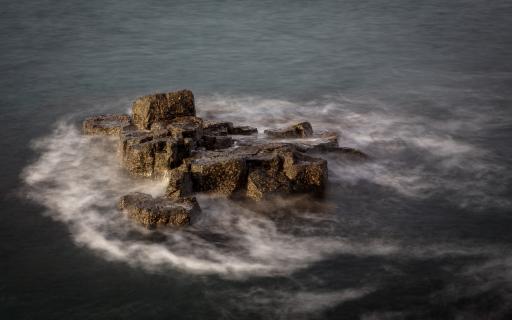