Tom Snowie, a local cabinet-maker, portrayed Rob Roy on the stage in Inverness for 28 years, between 1915 and 1943. He had first become interested in the stage as a teenager in the late 1890s, working as a stagehand at the Theatre Royal. He later became stage manager under the proprietorship of Cameron Burgess, who had always played the part of Rob Roy until illness in 1915 gave Snowie the chance to play the role.

Rob Roy was produced at the Theatre Royal by a company of over 50 performers under the management of award-winning photographer Andrew Paterson, who also acted in the production as Captain Thornton. A review of this popular play said: "The theatre was filled up to the last inch of standing room on Friday night, and again on Saturday night. On each night people turned away from the doors disappointed; the bumper houses, the applause and laughter of the audiences were convincing proof that the presentation of the Scottish drama was pleasing and satisfying! The last performance had the spirit and smoothness of professional work." 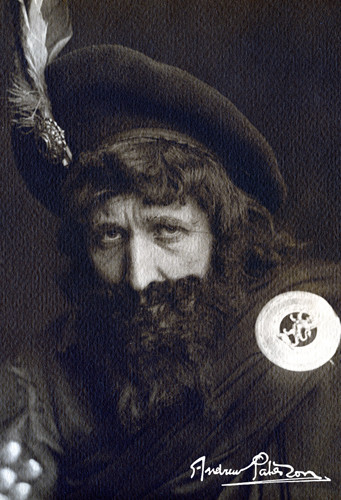 In 1932 the Sir Walter Scott centenary was celebrated with a production of Rob Roy, and an indication of how popular these presentations were, the Highland Transport Company ran late buses to Beauly, Muir of Ord, and Dingwall, and a special bus to Fortrose on Thursday and Saturday nights.

One review said: "Judging from the large audience which attended the opening performance last night, and the continuous applause which greeted the conclusion of each stirring incident or each humorous or pungent sally, it was evident that everybody present was enjoying the play to the very utmost... Indeed, from the overture, that beautiful series of folk songs, to the very end the performance went with complete animation and a refreshing amount of vigour and sprightliness."

In his 1932 memoirs, actor Donald Dallas wrote: "Our present Rob Roy 'the character I mean' is Tom Snowie, who has played the part so long and so well that he is absolutely indispensable." Snowie would go on to portray Rob Roy for a further 11 years.

Share your stories of figures from the Highlands and Islands

Stories are at the heart of what we do as a project and we are always looking to learn more about what the Highlands and Islands means to people who live, work, and visit here. We would love to know, do you have a story of a favourite figure, historical or contemporary, who you feel represents the 'Spirit of the Highlands and Islands'? Tell us below, we can't wait to hear from you!