Lismore’s name comes from Lios Mòr which is Gaelic for 'Great Garden,’ and our party encountered a few of the many species of plants which flourish wonderfully on Lisore’s limestone soil.

We were exploring the land around the fish trap just beneath Castle Coeffin. Roddy MacLean was our leader and told us the Gaelic names of plants and their stories, and he explained their traditional uses. Water mint makes fantastic tea, for example, and hazelnuts are good for knowledge. The Grass of Parnassus, a five-petalled flower with a tall stem, called Fionnan Geal in Gaelic, and its uses included mouth wash and eye-lotion.

The ground was speckled with bright yellow silverweed whose soft, furry leaves were used by Roman soldiers to make their shoes more comfortable. The roots were mostly eaten in times of famine, either baked, boiled or roasted. Apparently they taste a bit like parsnips. The roots were also were ground into flour for bread- or porridge- making. The plant is known as the 'Blessed silverweed of the Spring, the seventh bread of the Gaels.’ Barley, bere, (another type of old grain), wheat, oats, rye, and peas were the other six ways of making bread.

Grass of Parnassus, Fionnan Geal, on the Isle of Lismore 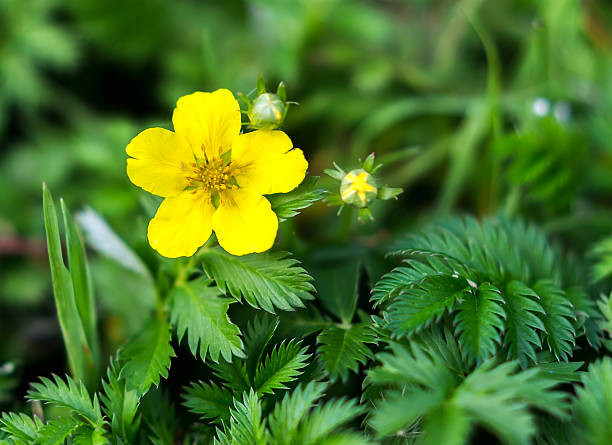 More plants on the foreshore included greater plantain, named in Gaelic after St Patrick, Cuach Phàdraig. Cuach has evolved into the English 'quaich’, meaning a double-handed drinking vessel. The leaves can be used as a poultice for stopping blood-flow.

We came across a clump of sweet-smelling meadowsweet, and Roddy told a tale about this too. Cù Chulainn was an Ulster-born warrior living in Sleat in Skye where he was well-known for his bad temper and fight-picking tendencies. He was once getting into a life-threatening fit of apoplexy whilst quarrelling with someone. This was witnessed by a group of maidens who convinced him to step into a bath of meadowsweet. This calmed him down and thus saved his life, and from then on he would always carry a sprig of the plant tucked into his belt.

Share your stories and memories of the Highlands and Islands